Aloe Ferox vs Aloe Vera: What is the difference? 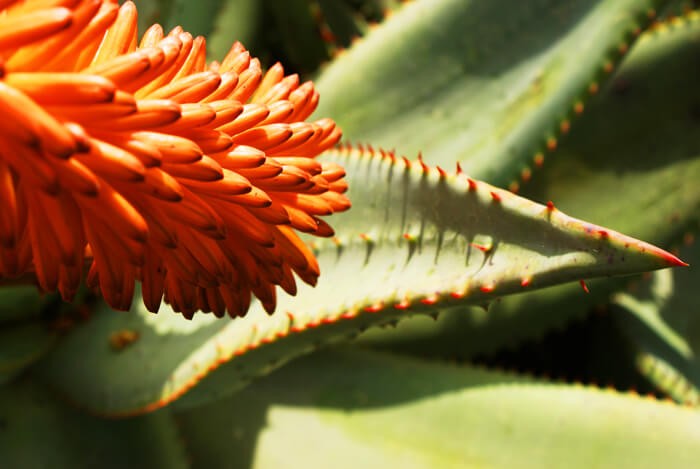 Aloe Ferox is not a plant we hear much about.  But the benefits are amazing and under-estimated.

Aloe preparations have been used as a natural remedy for millennia.  As the clean beauty movement continues to gain momentum, with more consumers seeking brands that are as transparent in their ingredient list as they are natural in their products, some species of aloe continue to dominate the beauty and skincare world.

If whilst browsing the beauty and skincare aisles and skimming over the ingredients list, you might have come across the ingredients Aloe Ferox and Aloe Vera. You might ask yourself what is the difference between aloe vera and aloe ferox.  Aren’t they the same thing? The answer is no and here’s why.

Aloe Ferox has been has been viewed as the miracle plant by many over the years. Commonly known as the Cape Aloe or Bitter Aloe, most people are more familiar with its ‘cousin,’ Aloe Vera. However, the differences between the two are significant.

Contrary to Aloe Vera that is heavily cultivated worldwide, Aloe Ferox is indigenous to our rich African soil and grows wild in its natural habitat without the use of pesticides and artificial fertilisers. It is also free range harvested using ancient methods.

Scientifically proven to penetrate the skin to the deepest layer, Aloe Ferox is ideal for skin care. Rich in amino acids (the building blocks for new cells which make up healthy skin), Aloe Ferox contains almost double the amount of amino acids compared to Aloe Vera.

In contrast to its relative, which contains very little sap, Aloe Ferox has 20x more bitter sap containing the powerful agent Aloin.  Aloin is an anti-oxidant and viral stimulant known for its healing properties. In addition to the above, Aloe Ferox is rich in polysaccharides and other plant metabolites, all of which contributes to soft and smooth skin that is hydrated, nourished and revitalised.

While the Aloe Ferox plant is similar to Aloe Vera in many ways, the chemical composition of the aloe gel from its leaves (which is the part of the plant used in skin-care) differs. In Aloe Ferox, the bitter Aloin is found just under the skin and can be easily separated from the gel-like inner leaf. However, in Aloe Vera, the Aloin is found throughout the leaf and is extracted via a chemical process.

Aloe Ferox, unlike Aloe Vera, NEVER has to be filtered. This means it retains all the naturally present active plant chemicals. After extraction, the juice of the Aloe vera leaves decolourises and loses its viscosity much more rapidly than that of the Aloe Ferox. The solids content of the juice in Aloe Ferox are greater in volume than those obtained from Aloe Vera and contain considerably more Iron and Calcium. Aloe Ferox is also cold-pressed – no heat means, no degradation of the natural plant botanicals.

Although both plants form part of the succulent family, they differ in appearance. Resembling a cactus, the Aloe Vera plant is stemless or very short-stemmed with thick, greenish, fleshy leaves that fan out from the plant’s central stem. The margin of the leaf is serrated with small teeth.

In addition to the many benefits discussed, Aloe Ferox also contains powerful active ingredients and vitamins that boast a range of benefits:

Cape Aloe Ferox gel has a dilatory effect on the capillaries and the veins, thus resulting in an increase of the amount of nutrients being transported. With more nutrients available for growth, nutrition and repair, the process of rejuvenation and regeneration can occur more rapidly. It also stimulates normal lymphocytes and possesses enzymes which stimulate the growth of new cells.

Vitamin E or Tocopherol is a powerful antioxidant that has the ability to neutralize excess free radicals both within and on the surface of the skin. In this way, it protects against the oxidation of skin cells and ageing. The photo protective effect of vitamin E can also be attributed to its radical scavenger capacity.

Vitamin B5 or Pantothenic acid stimulates cellular activity, cell growth and tissue formation. An anti-inflammatory, it is also effective in healing wounds, protecting against sunburn and promotes normal keratinization. Best known for being a humectant, it protects the skin’s barrier and helps the skin to retain its moisture levels.

Vitamin B2 or Riboflavin aids in the protection of cell constituents from oxidative damage. Used as an emollient, it conditions and provides a protective barrier to the skin, locking in moisture. It also increases Tyrosine activity, an amino acid found in the body which helps to produce melanin. With non-inflammatory properties, it helps heal skin lesions too.

Vitamin A Palmitate has shown to be an effective antioxidant when applied to skin and is well known as a skin “normalizer.” By activating cellular oxidation, collagen production and elastin is improved.

Vitamin B6 or Pyridoxine (Oil soluble) helps break down proteins into amino-acids which are used for cellular construction. It also prevents scaling and skin dryness.

To recap, here’s why Aloe Ferox is best suited for your skin: